Cotu Secretary General Francis Atwoli at the Masinde Muliro University of Science and Technology where he was awarded an honorary doctorate degree on December 14, 2018.

Central Organization of Trade Unions (COTU) Secretary-General Francis Atwoli dramatically smashed his phone on the ground during addressing a press conference in Nairobi.

In a video published by the Daily Nation on Monday, March 9, Atwoli is hurling his phone on the ground when addressing allegations around ex-CS Rashid Echesa’s visit to DP William Ruto’s office.

Addressing the press, Atwoli lamented that in the era of ‘roaming phones’, the Deputy President had been lying to Kenyans about being unaware of Echesa’s visit in his Harambee Annex office.

“The DP wants to tell us that Echesa and other foreigners were in his office more than 1 hour and 22 minutes and no one told him that they were in his office…yet that is the second-highest office in the land?” he posed before invoking his infamous ‘Washenzi’ refrain.

“Hiyo ni mambo ya washenzi hayo! (that is stupidity!),” he barks as he hurls his phone across the room to the bewilderment of his media audience.

There is laughter in the room as his colleagues on the table facing the media fidget, visibly disturbed by the abrupt turn of events.

“He [DP Ruto] goes ahead to lie to the mourning family of the deceased police officer at the funeral and asks for a slot to address the crowd. Shame!” he adds.

This is not the first time that Atwoli is resorting to such antics to get his message across.

During a show with Jeff Koinange on Citizen TV on October 23, 2019, the firebrand workers’ union boss flung his iPhone 11 pro max across the studio.

Koinange attempted to catch it midair, but it zoomed past him and hit the other side of the studio with a resounding thud.

Prior to the phone-flinging incident, Atwoli had boldly stated that Deputy President William Ruto stood no chance at securing the presidency in 2022.

Atwoli is one of the biggest critics of DP Ruto’s 2022 presidential bid, and has been on record several times swearing that the DP will not be president in 2022.

Atwoli angrily throws away his phone at a press conference. 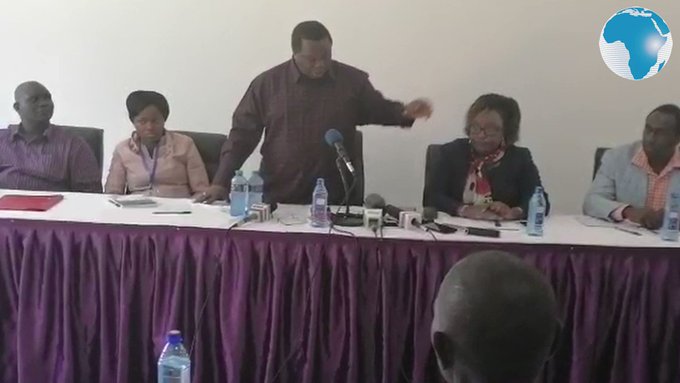 See what BFF Tallia Oyando did for Chiki on her wedding!

Family of Kenyan man who succumbed to Coronavirus...

Why Kenyan Pneumonia Cases Have Spiked Up Amidst...

Will Huddah Monroe Release A S3xtape Before Joining...

Family of Kenyan man who succumbed to Coronavirus...

Family of Kenyan man who succumbed...